In end of 2013 I got together with friends and founded a club (FSG) to get a 220 MHz Band repeater on the air in Tampa Bay for general amateur radio use.   We purchased a already on the air coordinated repeater system from another group known as “West Central Florida Group, Inc.”.   As this was already coordinated on the air in the Tampa Bay area it should have been a matter of notifying the FRC to change the coordination to our name.

The prior owners wrote the FRC coordinator (Dana) on my behalf and asked that it be changed in December 2013. This was stymied by Dana with requests for information over weeks, with half answers. Check my emails with Dana for an example of this.

During this period I attended a FRC members meeting at the Orlando Fair grounds in February 2014, imploring them to act on this. I was told to sit down and “shut up”, even though I had followed procedure and applied to be on the agenda. The secretary refused to recognize my request, which is in violation of the bylaws/Roberts Rules of Order.

During this meeting a vote was held by the board, reelecting the board. I found this funny, but it was accepted and they moved on. I do wish I’d been more familiar with the bylaws at the time as the members must elect the board.

On 11-May-2014 Dana Rodakis finally issued the Coordination for the repeater we’d purchased in December 2013! This was over 6 months for some basic paper work.

During this time we acquired other repeaters on the 440 and 900 MHz bands. We attempted to coordinate these repeaters and we asked for information the FRC was not permitted to ask for under its coordination policy.   They objected to the antenna patterns we used, but attempts to get them to clarify their technical standards were met with silence. See Reference #5 and Reference #6 for this.   They keep asking for enclosing streets and other information above what is required in the written coordination policy section #11.

On 9-Apr-2016 I attended the Tampa Amateur radio club’s tail-gate swapmeet. During this I ran into Mike Fletcher, district 4 director of the FRC. As we are both members I approached him as a concerned member of the organization.   I raised my issues and implored them to follow their by-laws as written or explain their technical requirements. I was told to shut up, and

“I (Mr. Fletcher) wrote most of the bylaws and I don’t need some kid to recite them to me”.

“If you wrote them why can’t you follow them?”

I explained how this was a serious violation of how a member’s organization should work, and that it was offensive to me as a member.

He said, “we can do what we want as the board, it’s only a suggestion for us to follow the by-laws”.

At this point I realized I was arguing with someone who didn’t posses the ability to reason and I walked away.

As I was unable to get anywhere with the FRC and further was told by Dana to not contact them again. I’ve enclosed this as Reference #7. He emailed me back and I again asked him to follow their policy. This is Reference #8

At this time Mr. Fletcher called me in May and told me to quit contacting the FRC as they “don’t give a fuck about me”.   I’m a member and they cannot choose to follow their polices or not. I do not have a recording of this call.

As this letter was cc’d to the Board via email with return receipt requested, I received confirmations from the following board members they either read it or deleted it. Steve Lowman, Mike Gonzalez, and President of the board, Ray Kassis. This is Reference #10

The FRC doesn’t work in a prompt manner doing a disservice to amateur radio in the State Of Florida.   Reference the website showing they have not processed renewals since May, and new coordinations since January! This is nothing but incompetence.   The website print out is attached as Reference #11

In September 2016 the FRC coordination database was posted online.   I saw this as a SQL table and loaded it into mysql. This contained all the locations of each repeater in the state along with the contact information on each repeater.   The source for this was from Directors Lavender and Rodkis webserver, and posted on a public website for all to see. They have since removed it.

This was later this was posted on the website Reddit where some kind user converted it to a KML file enabling us all to download it in Google earth. 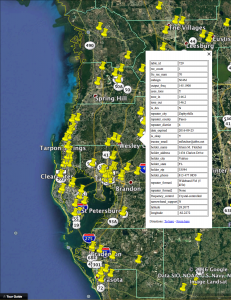